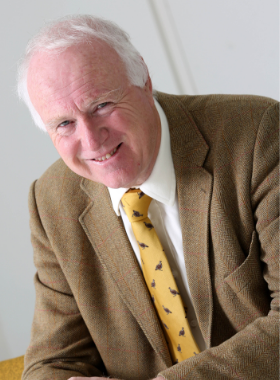 The chairman of a Ruthin-based civil engineering firm has been awarded an MBE for services to the economy in Wales.

Huw Jones of Jones Bros Civil Engineering UK was awarded the honour as part of the Queen’s Birthday Honours list.

Jones Bros, which employs more than 500 people, is currently working on contracts in various sectors including highways, flood and marine defence, waste management and renewable energy around the UK.

Huw said: “I have been very fortunate to have had the opportunity to lead and develop an organisation through steady growth over a number of years.

“My focus has remained on the longer term view and central to this is the development of the people and businesses employed and associated with us and the wider benefits that can bring to our communities.

“Being North Wales born and bred and living here all my life, I have always seen so much potential and opportunity in this area as well as the wider Welsh region. We are a nation of capable, committed and resourceful people and I am very keen to ensure that opportunities don’t pass the region and its residents by.

“I have been lucky enough to take part on various boards and committees with CITB, CECA, ICE and the CBI enabling me to have the ability to represent the region and its economy.

“I am very fortunate to have a fantastically dedicated and able team of people working with me, many of whom have been graduates of our various training programmes and are now directors and senior managers of the organisation.

“I see no limit to what we can achieve here in Wales and take an ambitious view of the possibilities provided we invest in training and development, work in collaboration and commit to our goals.”

Established in the 1950s, Jones Bros’ leadership team consists of members of the second and third generations of the founding family.

The company runs an award-winning apprenticeship scheme, which has produced more than 40 per cent of its current workforce, with many of its senior managers having started out as apprentices or in a trainee role.  It has recruited more than 100 apprentices during the past three years.